14 Mai The role of intestinal permeability

Posted at 13:59h in pll-therapeutics by Pll Therapeutics

More and more the Gut is highlighted in many diseases as playing a key role in Parkinson or ALS by being the open gate for many components as bacteria, fungal element, lipopolysaccharides (LPS), toxins and chemicals to move in the blood and in the brain which can have a role in the development of the disease and in its chronicity.

ALS is a multifactorial disease where around 5 to 10% of the cases have a genetic origin.

PLL-THERAPEUTICS is developping a Drug product around the Neuro metabolism link to ALS tryptophan’s metabolites, reactive oxygen species, radical’s products … and to develop our formulation with the target to solve the gut leaking and avoid, due to some reasons in the change of microbiome for example, the increase of the intestinal permeability. In terms of effect, we will reduce the inflammatory process, decrease intestinal hyperpermeability, has an anti-oxidant effect, has an anti-free radical effect, has an antibacterial, antiviral and antifungal effect and rebalances neurological metabolisms causing degeneration of neurons and motor neurons.

Our first target was to validate the markers as circulating antibodies, which are the reflect of gut permeability and ALS disease, to create a companion diagnosis and to formulate our drug product with components able to decrease gut hyperpermeability and our ALS markers which will prove the stabilisation of the disease and improvement of the patient behaviour.

The way to transport our molecules is to use a dedicated GMP Grade Poly-L-Lysine (PLL) which :

Anti-conjugated methionine in motoneurons of the spinal cord (A,B).

Immunoreactivity was absent in vehicle animals (E) and in animals(F). 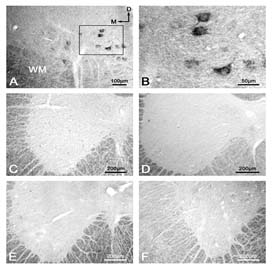 After 3 days of DP1 on DSS ( Dextran Sulphate Sodium) 2% rats the gut permeability came back to normal (as on witness) and their behaviour became normal and the inflammation disappear. 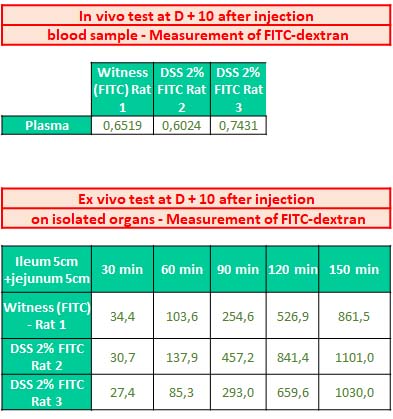 On Going trial with SOD1 mice with our DP1+DP2

First results after 15 weeks on Rotarod 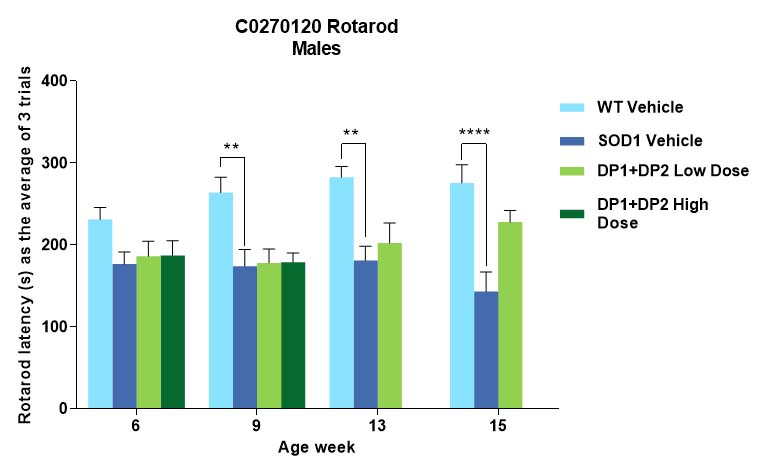